Here’s my version of Moon Knight, wearing his “magic Egyptian armor” as seen in the 2014 volume of Moon Knight, issue 3.  I wore it at DragonCon, and then again at New York Comic Con.

This was probably my most ambitious project yet.  Some challenges included figuring out scale mail, creating eye coverings that look opaque white from the outside but you can see through from the inside, and carving that bird skull out of insulation foam.  Also, capes and hoods: not as easy as you would think!

I made some changes between the two times I wore it; the most visible part is the hood.

The DragonCon pics on the bottom row make it look like some of the whites are fairly different from each other, but it’s a trick of the lighting; the New York Comic Con pics in the top row are more color-accurate.  The last picture is me and Declan Shalvey, who designed and drew the costume in its first appearance.  He was wonderfully nice and complimentary about the costume. 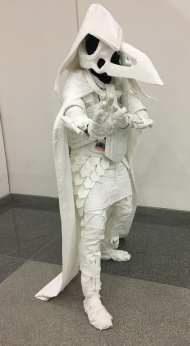 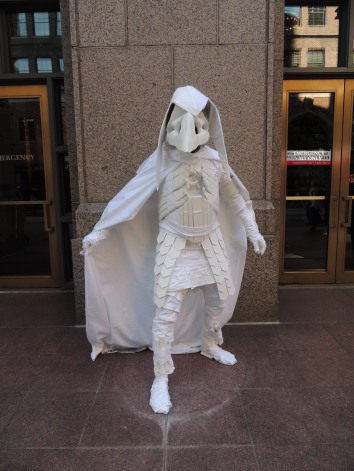