2funBasTards is a performance collective with many members. Michael O’Briant, Tom Bleigh, Chris Wildrick, and Blaire Bundy were the performers for this project.

Michael (who is both a portrait painter and a singer) was dressed as Elvis. He painted a portrait of himself as Elvis on black velvet while singing some of Elvis’ greatest hits. Tom, the BartenderBasTard, regularly poured him shots of Black Velvet Whiskey. Chris, the BodyguardBasTard, pointed out the name of each song on a cue card. Blaire was the act’s rodey.

As Elvis got drunker, his painting and singing grew progressively more florid and unique. When he finished his painting, the performance was over. 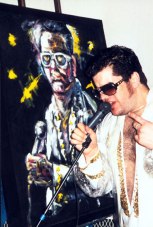