2funBasTards is a performance collective with many members. For the first performance of this project, Terry Tierney was SafetyBasTard Zero, Jason Lee was RedBasTard One, Tom Bleigh was BlueBasTard Two, and Chris Wildrick was YellowBasTard Three. For the second performance, Tom Cranley took over the position of SafetyBasTard Zero. Molly Carter and Rick Schneider helped make the props.

The three SweatBasTards entered color-coded Sweat Tents (a.k.a. BasTardBags), which were then sealed by SafetyBasTard Zero. A central heater (the BasTardBaker) then pumped a considerable amount of heat and humidity into the tents.. The SweatBasTards attempted to sweat more and longer than their compatriots, often running in place and doing stretches to increase their sweat production. They each had a single bottle of water for hydration and a snorkel to provide fresh air.

Heather Hollern, Amy Derosier, and Laura Derosier distributed flags to the audience members so they could cheer on their favorite BasTards.

SafetyBasTard Zero continually checked on the health and welfare of the SweatBasTards. When the SweatBasTards couldn’t take it any more and broke out of their tents, he recorded their official time.

BlueBasTard Two won the first event and RedBasTard One won the second performance. Both events lasted about two hours.

Pictures: The team’s helmets; the equipment; the performance in process; SafetyBasTard Zero; RedBasTard One; BlueBasTard Two; YellowBasTard Three; SafetyBasTard Zero checking on some humid tents; the BasTardBaker; a fogged-up tent; an open tent; the team. 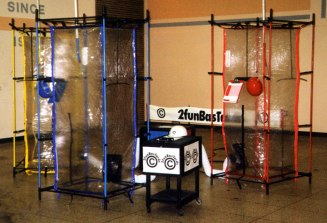 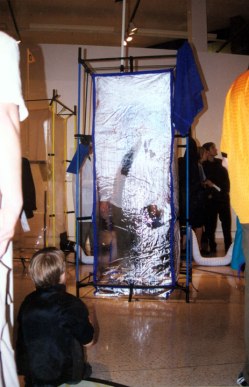 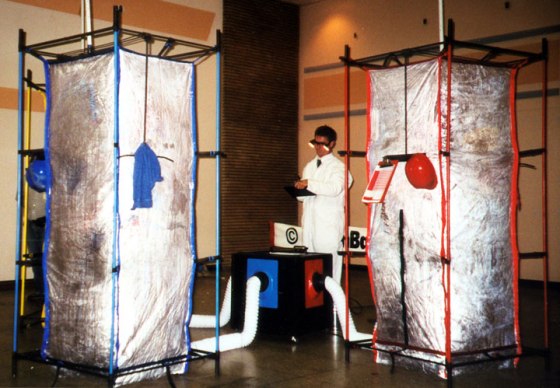