2funBasTards is a performance collective with many members. Chris Wildrick and Jason Lee were the performers for this project.

In this performance, Chris and Jason typed up 500 text-based artworks each. They dressed in classic early 2funBasTards costumes of blazers, khakis, and Groucho glasses, then climbed up on a public podium on campus in Madison, Wisconsin, with the papers in a briefcase. They proceeded to fold the papers into airplanes and throw them out across the quad.

The passersby often picked up the airplanes and read the text messages, which ranged from self-referential absurdities to insults to revealing personal information.

After throwing a couple hundred airplanes, a campus police officer stopped the performance, threatening to charge 2funBasTards with a $200 littering charge for every airplane they had thrown. 2funBasTards, who had always planned on picking up the airplanes after throwing them anyway, then retreived all the airplanes using trash bags they had brought for that purpose, and walked away.

They later installed the airplane-filled trashbags, the remaining unfolded texts, the suitcase, their Groucho glasses, and pictures and video of the event at an exhibition at the Soap Factory. 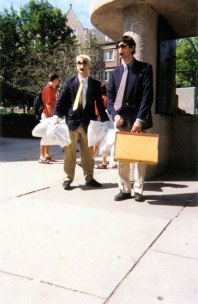