2funBasTards is a performance collective with many members. Chris Wildrick and Jason Lee were the performers for this project.

Chris, the PressBasTard, dressed up in a reflective silver suit with sunglasses. Jason, the MediaBasTard, wore a rig with several high-powered halogen lights and a camera pointed straight ahead. The performance took place at night at a show of light-based art.

Chris walked around and asked people if they wanted their picture taken with him. If they said yes, he would give them a second pair of sunglasses and they would both stand in front of Jason. He would turn on his lights, which were blindingly bright, and Chris would activate the camera via a remote wire.

Since there was no focus control, and because of the lighting situation, the images came out with an (intentional) wide range of effects, as seen in the pictures below. Chris’ suit was designed to reflect the light, making him blurry even if the other people were in focus. 2funBasTards mailed everyone a copy of their photos after the event.

The photos below are samples of the pictures that were taken by the light and camera rig, which used black and white film to enhance the exposure effects. The final photo, in color, shows what it really looked like, and was taken by a 2funBasTards ally during the performance. 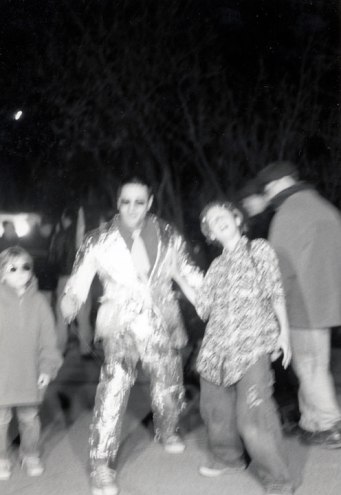