If they were remaking 10 classic movies with an all-dinosaur cast, which dinosaur species would be chosen to play each of the famous roles in each movie? In other words, what kind of dinosaur would play Darth Vader in Star Wars, or Rick Blaine in Casablanca–and who would be cast to play the Velociraptor in Jurassic Park?

This project follows up on others like Dinosaur High School in looking at the fictionalization of dinosaurs, and in particular the way we project personas onto particular dinosaur species.

The movie roles were chosen for the degree to which they have created (or continue) a certain cultural archetype. The goal, then, is to see whether any dinosaurs’ personas seem to fit these same archetypes. Once again, the results include some surprisingly strong associations between characters and dinosaurs. Is this association cultural or part of our innate psychology? Do dinosaurs play the same role in our culture as these movie characters do? Would other animals be associated with these characters as strongly as the dinosaurs are?

The book collects all the responses to the project and includes an extensive analysis. The original book featured a large fold-out poster, which can also be found at its full size in the PDF. 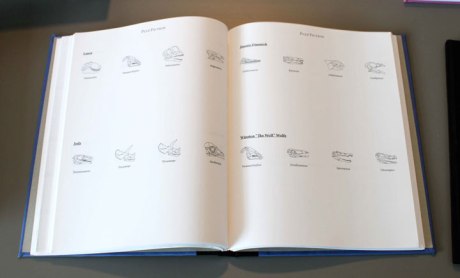 You can download the original forms for all the movies here and play the game yourself!