I asked people to make the sounds they thought certain dinosaur species would have made, then took their picture while they made their sounds.

Like Walk the Walk, this is a more experiential project, based on impressions, than a statistical set of data.

It shows the full range of sounds people imagine they might have made, from “roarrrrrrr” to the most sophisticated, complex harmonies. What is amazing is how much effort and thought the participants put into making their sounds; clearly they tailored their sounds very specifically for their chosen dinosaurs. When dinosaurs are portrayed in live media, their sounds are perhaps the least creative aspects of their recreation; these versions show that the average person’s imagination is not so limited.

You can see the explanatory poster here.

I have installed this in a variety of ways over time, including this computer console at the Museum of the Earth, where people could run the mouse over the pictures to hear everyone’s sounds. 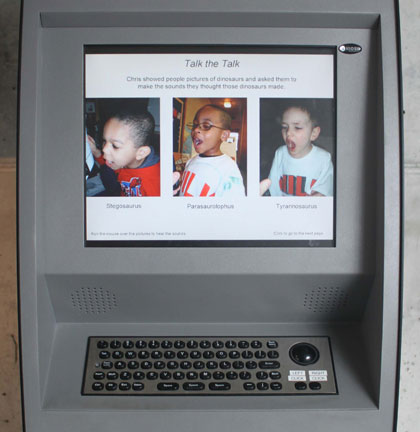 The only way to really get the experience now is to download this 30MB powerpoint.